Christmas, weddings, family get-togethers… any amateur or professional photographer knows that occasions like these call for photos as good as the day itself. It’s easy as a photographer to blend into the background and photograph a party or event from the sidelines, but photos taken from the outside looking in can feel like glimpsing through a window and seem a little cut off from the real-life celebrations. To really capture an atmosphere, you need to be a part of it. 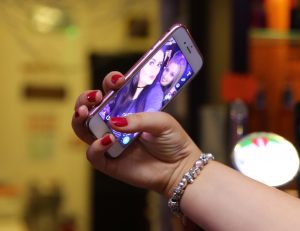 Candid shots, by definition, are photos taken without the subject posing, such as in a football match. But nobody goes to a party to stand still and hold a smile, and a staged photo rarely tells a story in the way a candid photo can. When you see a photo of people preparing food or excitedly tucking in to a buffet, you know the excitement is real because the picture isn’t posed. When you compare a natural shot like that with a clearly staged picture, how can we tell the people in it are enjoying themselves?

So how can we take more candid and less staged photos?

The first thing to do is ditch the flash. A bright camera flash is likely to surprise your party guests and make them more aware of the presence of a camera. Feeling conscious that photos are being taken will make people react, sometimes without even realising, and could result in the natural moment being lost.

One problem that may crop up is the constant movement of everything going on around you. People moving around could get in the way of a shot, or block the view just as you’re about to get that perfect moment. But this can be used as a positive – try using the busy nature of what’s around you to frame your photos. An image of someone laughing in the background with out-of-focus conversations happening around them in the foreground could be the picture that really captures the party atmosphere.

Finally, don’t be afraid to step out of your comfort zone. Taking photos from the centre of a crowd may seem unnatural, but it may also be the key to feeling as though you’re right in the middle of the party and not looking through the glass when you flick through the final photo album.

3 Ways to Use Reflections